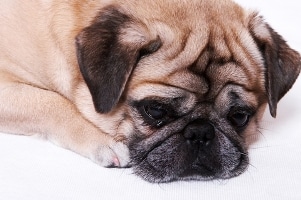 Hyperadrenocorticism (Cushing’s disease) is a reasonably common disease of middle-aged to elderly dogs. It affects both male and female dogs equally but tends to occur more commonly in smaller breeds. Cushing’s disease results in an ongoing overproduction of cortisol (a natural hormone that is normally produced in times of stress) from the adrenal glands which are found in the abdomen, just in front of the kidneys.

There are two main categories of Cushing’s disease. The more common of these types (85% of cases) is Pituitary-dependent hyperadreno-corticism (PDHA), in which the pituitary gland at the base of the brain produces too much of another hormone, which results in over stimulation of the adrenal glands. PDHA is generally due to a very small benign tumour on the pituitary (a microadenoma) but in a small number of cases can be due to a larger tumour (a macroadenoma).

In 15% of cases of Cushing’s disease, the overactivity of the adrenal glands is due to a tumour on one (or both) adrenal glands. These tumours can be locally invasive but if caught early, surgery may cure the adrenal tumour and the Cushing’s disease.
Clinical signs that develop when a dog has Cushing’s disease are varied but may include increased appetite, increased thirst, increased urination, excessive panting, a pot belly, symmetrical hair thinning, calcifications in the skin and an Increased risk of developing diabetes or a blood clot.
Cushing’s disease can be diagnosed with hormone tests (such as a low-dose dexamethasone suppression test), an abdominal ultrasound examination, or both. These days PDHA is most commonly treated with a drug called Trilostane, which suppresses the overactive adrenal glands and so helps to control the Cushing’s clinical signs.
This reasonably expensive drug needs to be given on an ongoing basis and repeated hormone tests are required (to ensure that the adrenals are suppressed the right amount) but a very good quality of life can usually be maintained with this therapy.