Deciding to have a much-loved kitten desexed is often a traumatic time for a pet owner. We hope that this brochure answers any queries you may have. If you have any other concerns, please feel free to speak with any of the GVH staff. 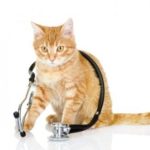 Cats are usually admitted to the hospital either on the morning of the operation, without breakfast, or if this is inconvenient on the evening before. The operation to castrate a male cat or to spey a female is performed under full general anaesthesia; we consider that the anaesthesia technique we use is the most advanced and safest available.

In males the area around the scrotum is clipped free of hair and both testes are completely removed; this eliminates the source of sperm and also the main source of the male sex hormone, testosterone. The operation is performed under general anaesthesia and sterile conditions. Normally the cat would be discharged on the evening of the operation and we would advise you to keep him indoors and quiet during that night. There are no sutures to be removed so there is no need for him to be returned to the hospital.

In the female, the abdomen is clipped free of hair, an incision is made along the midline of the abdomen, also under general anaesthesia and sterile conditions, and the ovaries and uterus are completely removed: this eliminates the possibility of having kittens, prevents her from coming into season, and prevents the development of infections of the uterus later in life.

Because both procedures are performed under general anaesthesia, the animals feel no pain during the operation itself; we routinely administer analgesics at the time of desexing to minimise any postoperative discomfort.

We normally keep female cats in hospital until the day following surgery, so that we can observe them closely and ensure that their recovery is uneventful. We will contact you after the surgery to let you know of your pets’ progress.

When she goes home, we ask you to keep an eye on the wound and to let us know if there is any problem with the surgery site such as swelling, discharge, or if she manages to chew any of the stitches out; these complications are unlikely but do occasionally occur and we encourage you to contact us if you have any concerns at all. Otherwise she may be allowed to behave fairly normally in the period after discharge.

The skin sutures need to be removed 10 to 14 days after the surgery; there is no charge for this consultation. 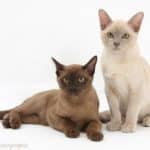 The best age to consider neutering a male cat is at about six months; at this stage the cat will have matured reasonably well physically and be old enough to cope with an elective anaesthetic and surgery, but will not have reached the age where he will have developed antisocial habits such as marking his territory.

The recommended age for desexing females is also six months. Occasionally, for example in spring, female cats may come into season earlier than the expected age; if this occurs we can proceed with neutering her earlier so that there is no risk of you having to find homes for kittens.

Advantages of desexing your cat: