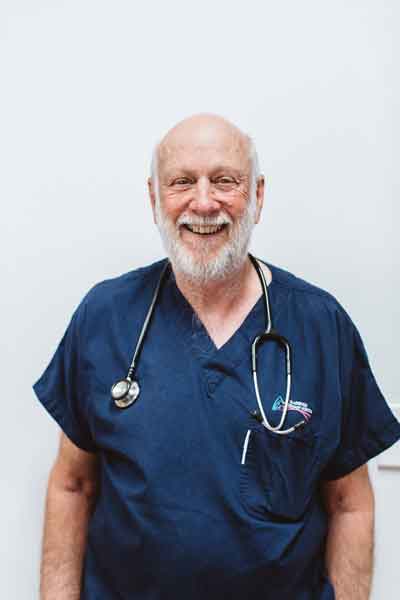 Max is a qualified specialist in small animal surgery with a particular interest in orthopaedics and oncology. He graduated from Sydney University in 1969 and has been at Gladesville since 1971. Max has been away from the practice from time to time taking a variety of roles in the Veterinary Faculty at the University of Sydney where he has acted as the Head of Surgery and, more recently, the CEO of the Veterinary Teaching Hospitals. Currently he retains a role teaching surgery and is the Academic director of the Clinical Skills Centre set up to teach clinical skills to vet students without the need to use animals for this purpose. In 1994-95 he was also appointed as a Visiting Fellow at the University of Florida.

Max qualified as a specialist in small animal surgery, becoming a Fellow of the Australian and New Zealand College of Veterinary Scientists in 1985. In November 1991 Max opened the first diagnostic nuclear medicine facility for small animals in the Southern Hemisphere at Gladesville. He receives referral cases for this facility from throughout the country.

In 1993 he was recipient of the Seddon award for meritorious clinical contribution to Veterinary Science in NSW and has twice been awarded the Australian Small Animal Veterinary Association’s “Practitioner of the Year”.

Max is a born and bred Sydneysider, father of four and grandfather of 8 who has, with his family and many pets, lived within a 5 km radius of the Gladesville Veterinary Hospital Since 1961. 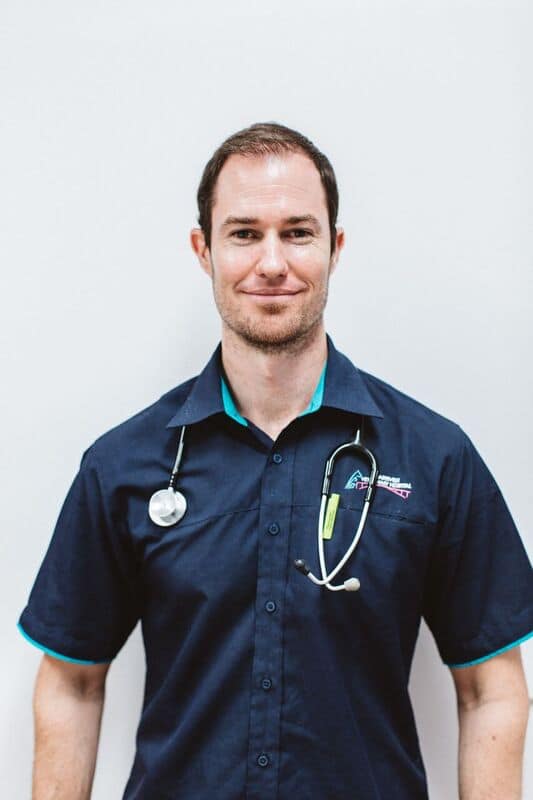 Dr James Berman graduated Veterinary Science at the University of Sydney in 2002.  He began his career working in his hometown of Canberra.  Since then, James has worked in Sydney, England, the United States and back in Sydney again.  Ever since studying in University James has loved and is happy to call Sydney home.

James enjoys the excitement, unpredictability and challenge of being a vet.  In his time as a Vet he has developed his keen interests in Diagnostic Imaging and Small Animal Medicine.  James has completed post-graduate training in Radiology, Ultrasound, Echocardiography and Small Animal Clinical Studies.  James was awarded Membership of the Australian and New Zealand College of Veterinary Scientists in the discipline of Veterinary Radiology in 2008 and had Residency training in Veterinary Radiology in Oregon, USA in 2012-13.

Outside work James loves to spend time with his beautiful wife, Selina, son Peter and his aptly named naughty cat Slice.  James like to catch up with friends and family as much as possible and get down to the beach to swim or surf whenever he can find the time. 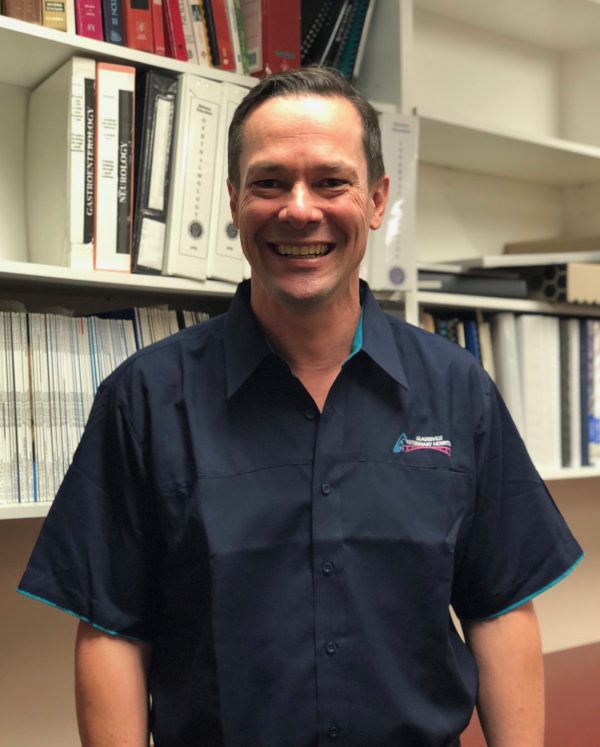 Dr Mark Hocking graduated with first class honours in Veterinary Science from Sydney University in 1994 and has been an associate at Gladesville Veterinary Hospital (GVH) since 1998. Mark grew up in Sydney and worked at a practice in Canberra for over three years after graduation. Mark completed a certificate in Veterinary Acupuncture (the International Veterinary Acupuncture Society certificate) in 2001. In 2002, he participated in a course in Trigger Point therapy run by Dr Liz Frank, a West Australian vet who has done pioneering research in this area. Mark undertook a year long distance education course in Veterinary Internal Medicine in 2004.

Mark’s interest extends to most other areas of small animal practice, including bird medicine.

Barry first came to Gladesville as an associate vet in 1986. Barry grew up amongst the mulga trees of a sheep and cattle property in far western Queensland. A childhood with an endless menagerie (joeys, a rabbit called Monica, a sheep, tortoises and, notable among these, two particular dogs and progressive generations of pet bantam chooks) led inexorably to the University of Queensland where he graduated in 1978 with a BVSc 2nd class honours.

Then followed a veterinary travelogue. Firstly a four year sojourn to Victoria in dairy cattle practice followed by two years wandering the world – this was funded by intermittent veterinary engagements in the UK; then a year’s mixed practice in Murwillumbah before electing to concentrate on small animal practice here in the most beautiful city on the planet.

Barry first came to Gladesville as an associate vet in 1986 and became one of three partners in 1990. Whilst a generalist by nature, an interest in ophthalmology saw him complete a year long post-graduate Distance Education course in this field in 1996. This interest continues and he is happy to encourage the “eye” cases of our practice into his domain. A similar course in radiology was completed in 2000 and most then another year long course in feline medicine in 2007.

And otherwise? Barry likes to draw and cartoon, to drink red wine (well, alcohol really), to dig fairly haphazardly in his garden and to travel (anywhere!). He shares a home in the inner-west of Sydney with his partner Peter and two sweet dogs, two cats and numerous chooks whose egg production could also be described as haphazard. Yes, the bantams made a triumphant return after all those years … and not before time! They bring a busy jollity to our backyard and are enthusiastic little pets. 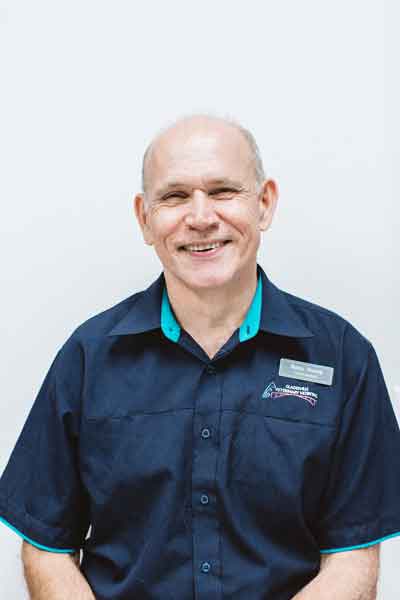 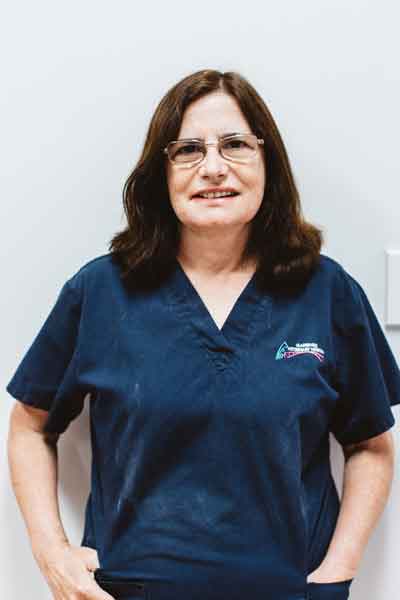 Rosalie was born in Sydney and grew up with a number of cats and sundry human family members. Rosalie graduated from Sydney University in 1982 and has been an associate at Gladesville since 1988. Rosalie has a particular interest in the medicine of birds and in dermatology.

Rosalie was born in Sydney and grew up with a number of cats and sundry human family members. A career involving animals seemed inevitable after this start. She graduated from Sydney University vet school in 1982 and married another vet shortly after this, and has worked in Sydney in small animal practice since then.

She joined the Gladesville team in about 1990. In 1999 she completed a year of intensive study in dermatology and has a special interest in skin cases, as well as bird medicine and general small animal medicine and surgery.

Rosalie’s interests include bush walking, reading, sports, holidays anywhere (especially Australia) and watching motor racing. Currently she is one of the NSW representatives of the Australian Christian Veterinary Association 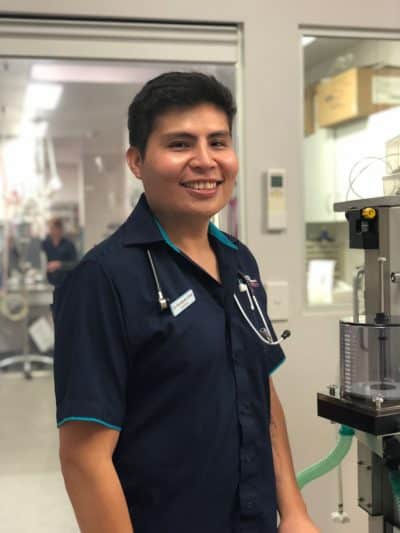 Dr Fernando Elias graduated from The University of Chile in 2012 and successfully finished a Diploma in Domestic Cats Medicine a year after. He worked for nearly two years in an Emergency clinic back home and finally moved to Australia in 2016.

He started working as a vet nurse while he was preparing for his Australian Veterinary Association exams and achieved Australian registration in July 2019. Having an special interest in cats, his aim is to keep studying to become an Specialist.

Outside work, he enjoys hiking, camping, going out with friends, playing guitar and soccer. He is passionate about the environment and motivates the Gladesville team to reduce, reuse and recyle. 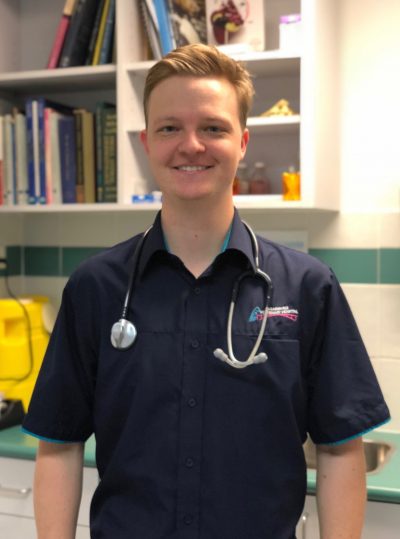 Dr James Bryan graduated from Sydney University in 2013. He spent his first three years of his veterinary career in rural NSW working in mixed practices in both Armidale and Dubbo where he gained a wide variety of skills in treating small and large animals. James also spent a year working overseas in England in a semi-rural town called Rochford, one hour from London.

James has a keen interest in both small animal Surgery and Ophthalmology and is very keen to continue his knowledge in these areas.

Outside of work, James loves spending time with his girlfriend Victoria (also a vet) and their ginger tabby cat Hamish. His interest include travelling the world, playing golf, running skiing, board games, tennis and archery. 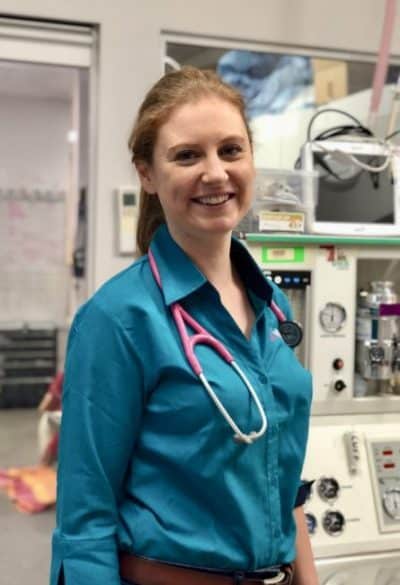 Dr Charlie May graduated from Charles Sturt University in Wagga Wagga in 2015. Charlie spent her first year as a vet in equine practice, but since then she has gained experience in mixed and small animal practice. She has grown up locally, but loves the country life – her favourite place to live has been amongst  the vineyards in Orange.

She is excited to be living back close to home. Outside of work Charlie enjoys sailing and spending time with her Australian Terrier Toby and her guinea pig Allie. 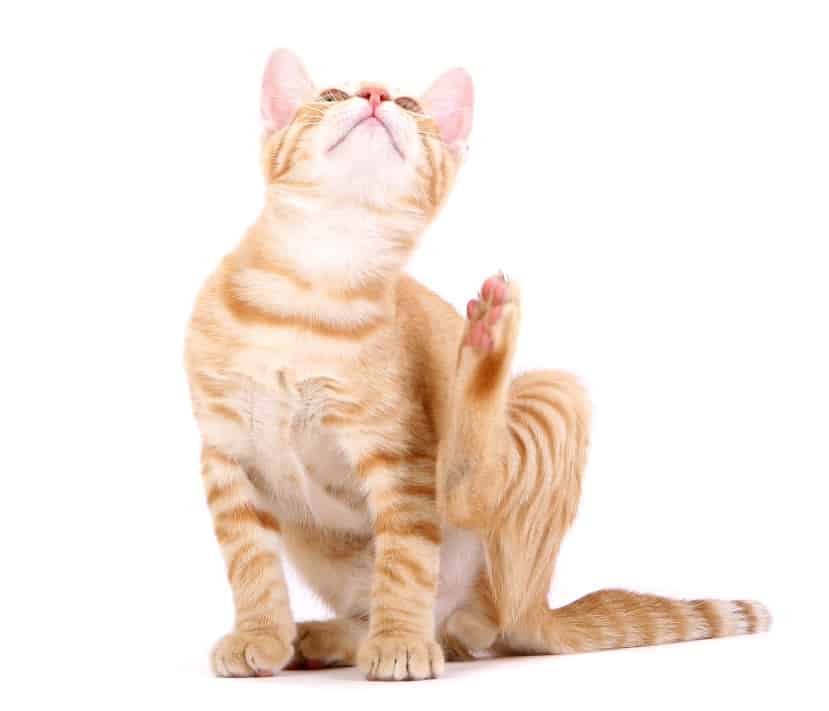 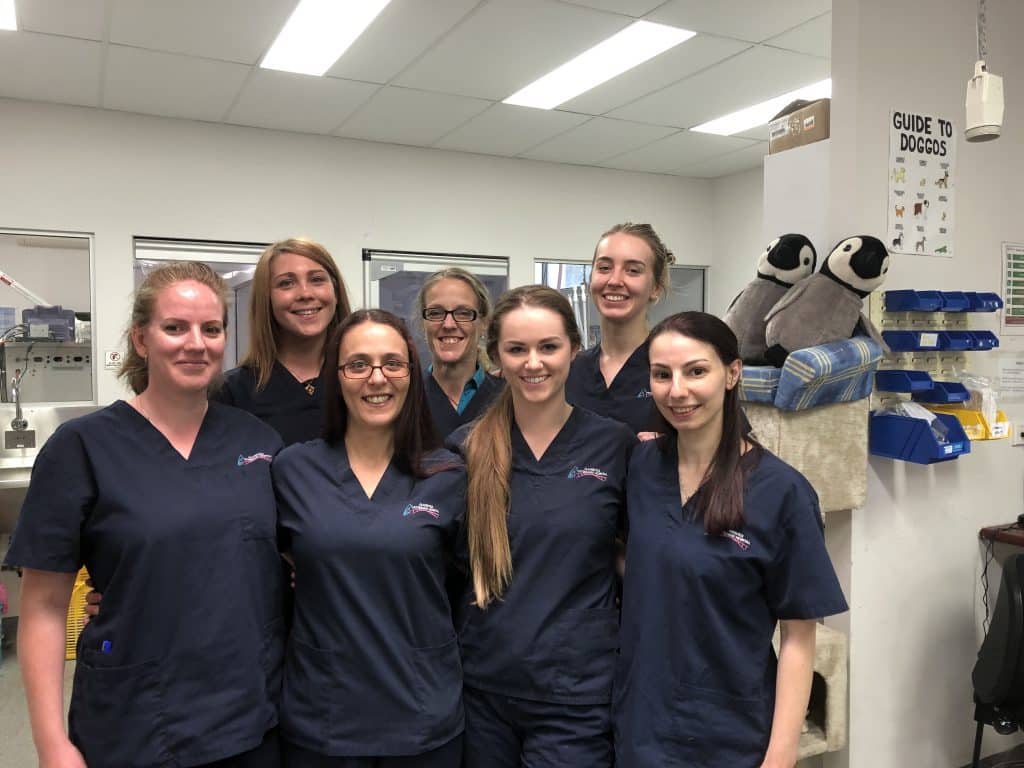 Our nursing staff – Kristina Sorbello , Katie Gear, Rebecca Dodd, Emily Alonso, Amy Wymark,  Jessica McNeilage, Stephanie Hide and Jade Webster form the basis of a cohesive and skilled team whose primary concern is the welfare of your pet during it’s stay.  Our nurses are ably assisted by our amazing animal attendant, Michaela Price, Julie Cairns and Nina Kitrungrot back the team up on weekends.

Amy Wymark, our Head Nurse, has recently been promoted and she is doing a great job leading her team while Jess is on maternity leave.  Congratulations to both of them.

All of our nurses take part in regular in-house and formal training to update their skills and knowledge.

Vets, nurses and receptionists alike at GVH take great pride on both our professional skills and our availability to you and your pet on a personal level. We welcome any feedback that you may like to offer on the quality of the service we provide to you.

We are proud of the qualities that our support staff bring to GVH.

We believe that ongoing education is essential to maintain up to date professional knowledge in our field and we strongly encourage our veterinarians, nurses and receptionists to undertake further education in areas that interest them.

Our reception staff is made up of a dedicated, hard working team. You will find Gina Hyland, Teresa Kiss-Follington, Caroline Jackson, Sushmi Gowrieswaran, Emily McClelland, Matilda Batten  and Denis Yang – who are always on hand to field any general enquiries you may have.

Diane Price is our administration officer and works tirelessly behind the scenes keeping the Practice on track.

Vets, nurses and receptionists alike at GVH take great pride on both our professional skills and our availability to you and your pet on a personal level. We welcome any feedback that you may like to offer on the quality of the service we provide to you. 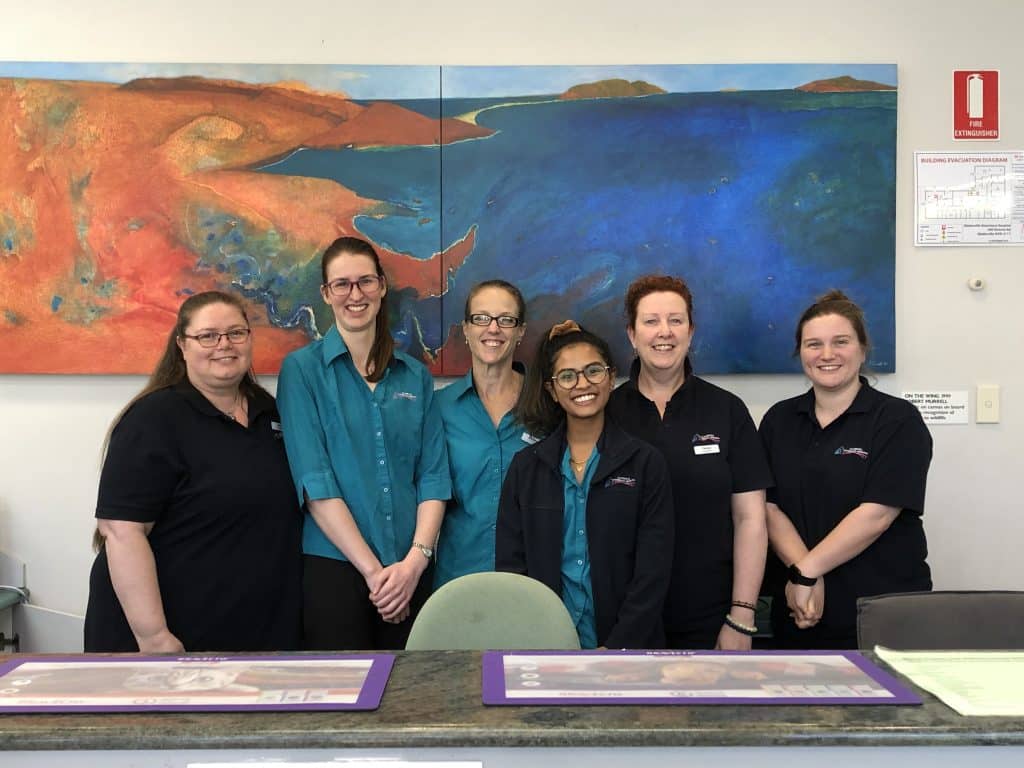 We are proud of the qualities that our support staff bring to GVH.

We believe that ongoing education is essential to maintain up to date professional knowledge in our field and we strongly encourage our veterinarians, nurses and receptionists to undertake further education in areas that interest them.

Clarrie takes his name from Clarence the cross-eyed lion and has been with us since being one of an abandoned litter in early 2011. He has taken ownership of the ‘back of house’.   He seems to gain enjoyment out of annoying the vets and nurses.  Most days he can be found amongst the ‘fluffies’ and towels or doing ’rounds’ checking on all the animals and cleaning up any stray food that may be sitting unclaimed on benches! 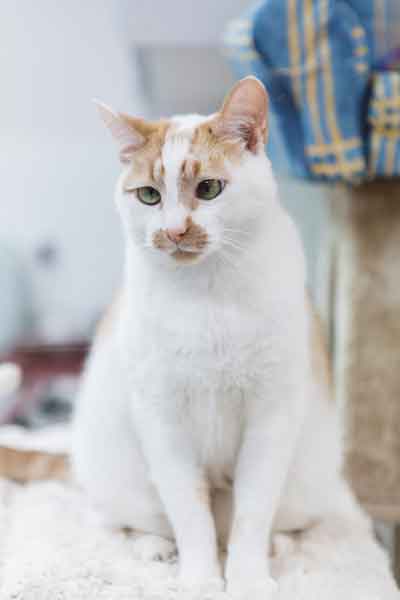