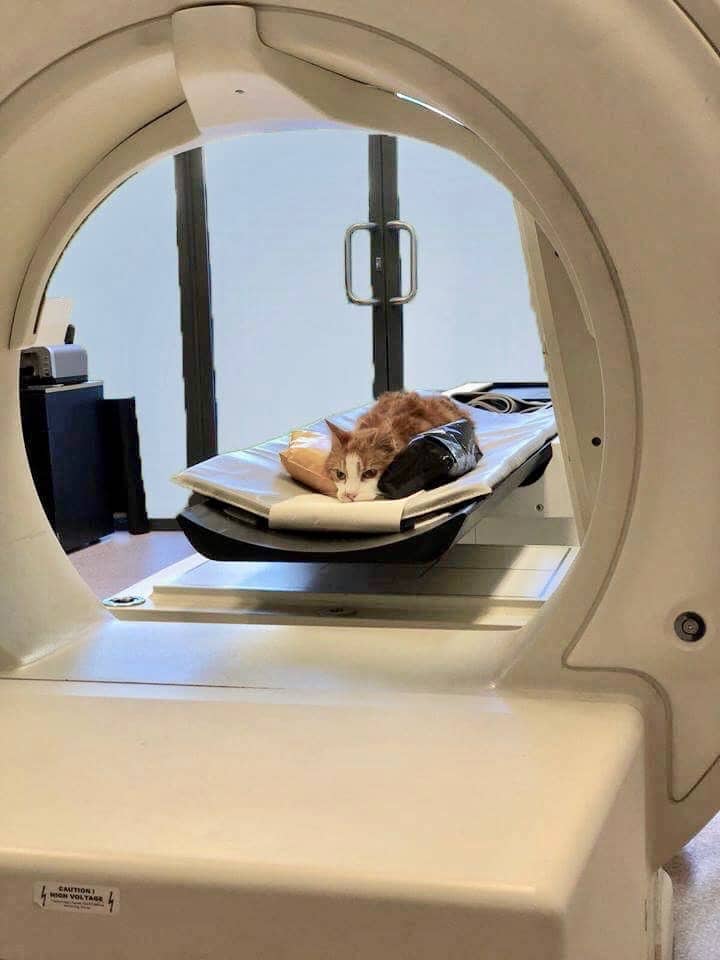 Gladesville is a referral centre for Nuclear Medicine in Sydney and Australia-wide. Dr Max Zuber has developed an expertise in this modality which has many clinical applications and we have on site the only small animal-dedicated nuclear medical veterinary facility in the southern hemisphere. We also have on staff Ann Bernar, a qualified Nuclear Medicine Technologist, who while joining us at GVH, works in the human Nuclear Medicine field. Nuclear medicine is a relatively new diagnositic technique where radio-isotopes are injected into the body to study various organ functions. Images of these functions are recorded using a gamma camera. Larger doses of radio-isotopes are also given as a form of radiation therapy to treat some forms of cancer.

We have areas of particular interest at Gladesville. The first of these is in the diagnosis and treatment of hyperthyroidism in cats where we now have experience in over 3,000 cases of this disease. Thyroid cancer in the dog is a relatively rare and often fatal disease but treatment with radioactive iodine can often halt the progress for extended periods of time.
Bone cancer or Osteosarcoma in dogs is a devastating disease with a very high mortality rate. While cures for this disease are elusive we have been using a radioisotope Samarium 153 to successfully alleviate the pain and temporarily stop the tumour growth in some dogs.

Lameness in dogs in particular can sometimes be very difficult to diagnose accurately and performing bone scans in these dog can often highlight the problem where normal radiographic techniques have failed.

What is nuclear radiation?

Nuclear radiation is radioactivity that comes from the nucleus of certain chemicals. These chemicals are called radioisotopes and are unstable. Just as a rock balanced on the end of a pole is likely to fall and give off energy on the way down, so radioisotopes give off energy and particles as they break down or “decay”.

What are the types of nuclear radiation?

There are three types – alpha, beta and gamma. The alpha is a big particle and is not used in Nuclear Medicine tests. The beta is a smaller particle given off from the nucleus and is only found in radioisotopes that are used for treating diseases. The gamma rays is not a particle but rather a small packet of energy. The Gamma ray is the commonest form of nuclear radiation in Nuclear Medicine tests.

What happens to the nuclear radiation?

“Half-life” is the time that it takes for half the radiation to go away. If the time period is short, the radioactivity disappears quickly. The commonest Nuclear Medicine radioisotope is called Technetium-99m and this has a half-life of six hours. This means that after one day, there have been four half-lives and only 1/16 of the radioactivity is left. This makes it very safe.

How does Nuclear Medicine compare with X-rays?

In Nuclear Medicine, the radiation is inside the person shining out and is detected by the gamma camera. In an x-ray, the radiation is shone through from the outside by a machine and a photographic film on the other side detects what passes through the body completely. The doses of radiation from Nuclear Medicine tests are similar to those from x-ray tests and are kept as low as possible.

Are we normally exposed to radiation?

We are all exposed to radiation every day. This comes from three main places:

The international unit for radiation exposure is the Sievert (Sv). Over a year, we all get about two thousandths of a Sievert of radiation (2 mSv) from these sources. The dose of radiation from scans and x-rays ranges from 0.5-10 mSv.

Do the levels of natural radiation vary?

Radiation levels are different in different parts of the world depending on the natural environment. In some places, there is a lot more radiation in the soil. For example, in Kerala in India, the sand is radioactive. Also the level of radon gas varies about 100-fold depending on where you are in the world. The level in Sydney is 5Bq/m’. The level of cosmic radiation is greater at higher altitudes. For example, it is twice as much at Katoomba than in Macquarie St. A plane trip from Sydney to London gives you 6 months’ cosmic radiation in 1 day.

What are the bad effects of radiation?

If you are unlucky to be close to an atomic explosion, the effect is death! The bad effects of low level radiation are cancer and foetal abnormalities. Pregnant women shouldn’t have a scan unless absolutely necessary. The risk of cancer from scans is very low.

How low is the risk of cancer from scans?

This is calculated from the number of cancers occurring in survivors of the American atomic bomb explosions in Japan, estimating how much radiation they got and making forecasts (“extrapolations”) from these results. For the average person, your chance of getting cancer in your life is about 300 out of 1,000. If you have a scan, your chances increase to about 300.3 out of 1,000. This increased risk is about the same as your risk of dying as a result of: