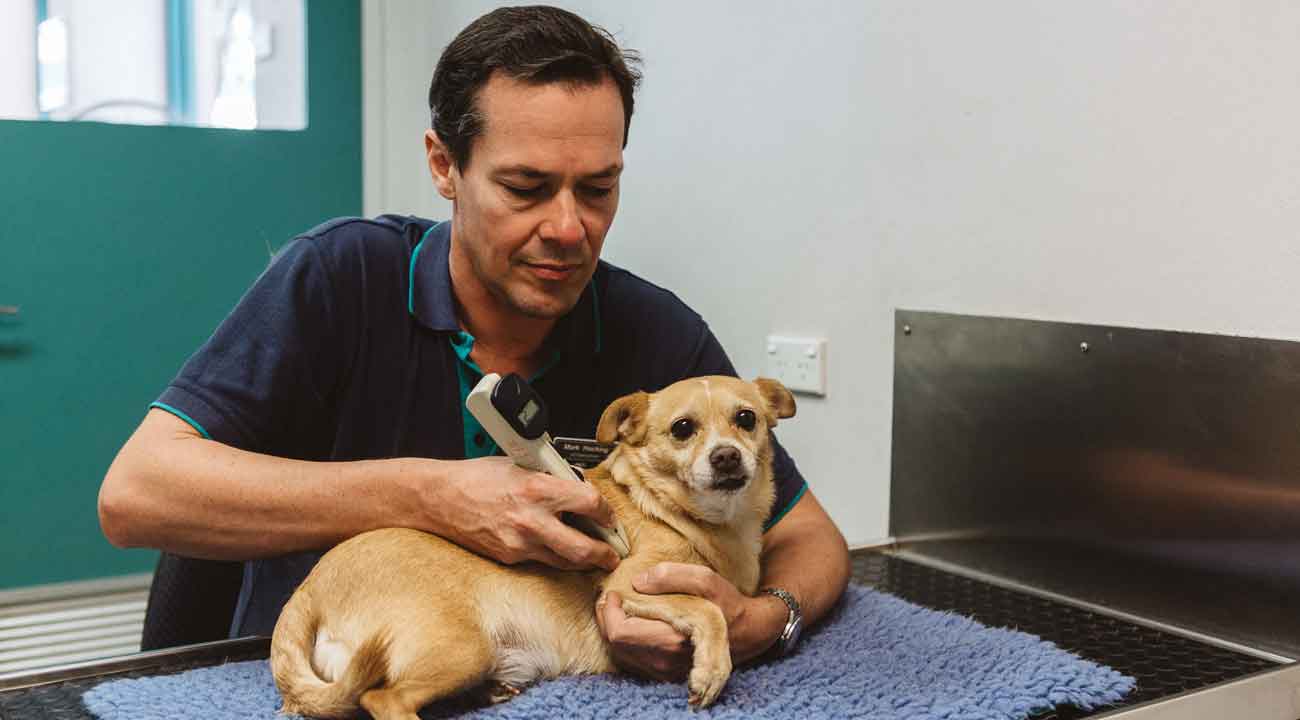 Acupuncture is one component of traditional Chinese medicine (TCM) and has been used in both animals and people for at least 4000 years. In recent decades the benefits of acupuncture have been explored and proven by the Western medical and veterinary community. Nowadays acupuncture is used as a standalone treatment or in an integrated with Western medicine. 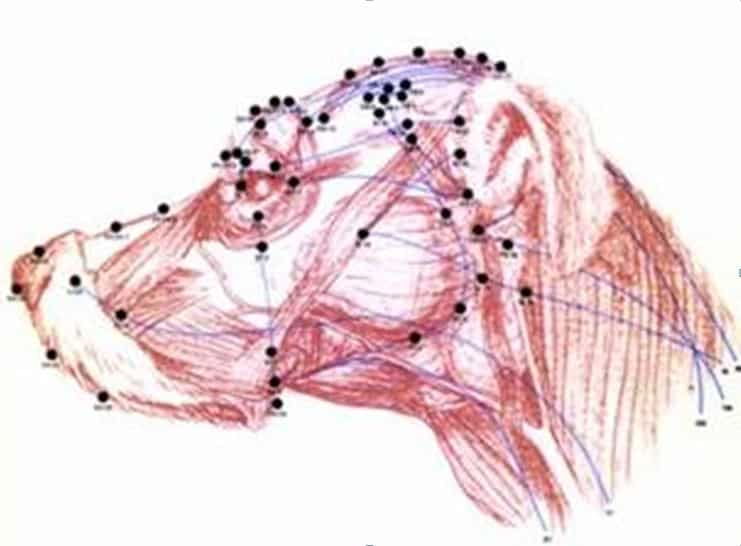 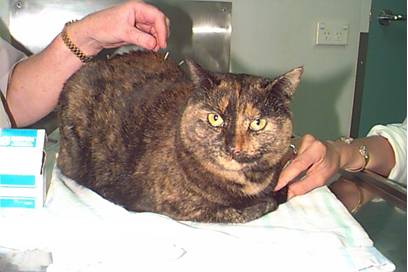 How Does Acupuncture Work?

The Chinese have developed highly complex theory to guide the practitioner of acupuncture. This theory has been refined through careful observations of the patterns of disharmony in humans and animals over millennia.

In TCM acupuncture is believed to influence the flow of energy (Qi) throughout the body. TCM treatment is based on the concept that disease is caused by disruption to the flow of Qi; acupuncture stimulates points on or below the skin’s surface, which results in the release of Qi. By selecting certain combinations of acupuncture points the functions of the internal organs and structures along the meridians can be improved.

Acupuncture needles have rounded ends instead of sharp points, which are designed to move between muscle fibres rather than puncture through them. This means that insertion of acupuncture needles is not particularly painful and the release of endorphins often makes the animal relax during treatment.

What Conditions Can Acupuncture Treat?

Acupuncture can be used alone or in combination with other Eastern or Western treatments to control a wide variety of disorders. At Gladesville Veterinary Hospital we encourage an ‘integrative approach’ to veterinary medicine, where traditional Eastern and modern Western medicine are combined to achieve a diagnosis and the most effective therapeutic outcome.

Acupuncture is safe and does not have the side effects sometimes seen with treatment with medication. 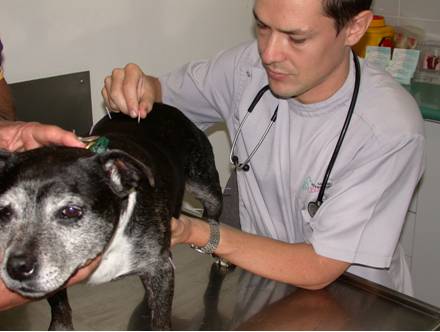 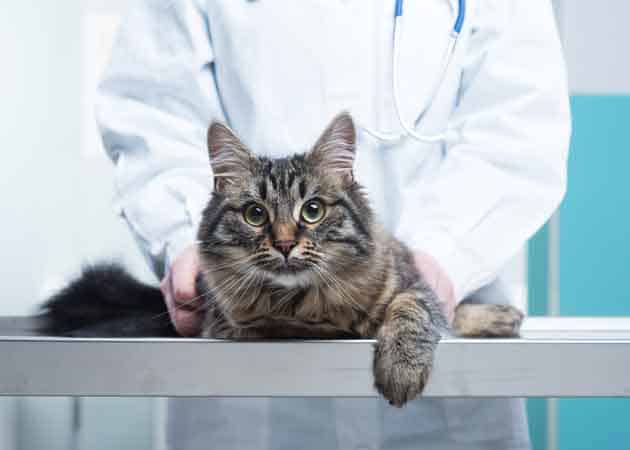 What conditions does acupuncture not treat?

Acupuncture is most effective in acute (recently diagnosed) cases, however many chronic cases can also benefit from acupuncture treatment. Acupuncture is not a substitute for surgery and will result in limited improvement in conditions for which surgery is necessary.

What Does Acupuncture Treatment Involve?

Dr Charlie May and Dr Mark Hocking are both certified in veterinary acupuncture through the International Veterinary Acupuncture Society (IVAS). An initial appointment with one of them will be necessary prior to treatment, and they will assess your animal and discuss whether acupuncture is an appropriate course of treatment. Often the first acupuncture treatment will also take place during that consult. We use a combination of traditional acupuncture needle treatment and treatment with our medical laser. Our laser has specific acupuncture settings and this is often a more appropriate choice for very small or anxious animals.

Each treatment lasts between 10-30 minutes, and can take place with you present (however if you would prefer not to be present that is ok!). We generally recommend three treatments 5-7 days apart and then we assess how your animal is responding to treatment. At the third treatment we may recommend reducing the frequency of treatment or making some changes to your animal’s treatment protocol (by changing acupuncture point selection). The number of sessions involved is dependent on the problem being treated.

You will notice one of three outcomes following an acupuncture treatment:

What is a Trigger Point?

You probably know what a Trigger Point is if you have had a massage – they are localised, hyperirritable areas, found within muscles, that are often exquisitely painful on gentle compression. In humans they are known to give rise to characteristic referred pain and can cause changes in internal organ function, as well as focal tenderness (found within a taut band in the muscle), restriction in range of motion of the joints and weakness of the affected muscle. Not all trigger points are perceived as painful (active) and may only be painful with additional pressure (latent). One of the most common trigger points in people is in the trapezius muscle (where a singlet/dress strap would sit on the shoulder). If you press gently on this area and you find a firm area that is tender, you have just found a trigger point.

As well as being a very common cause of stiffness and musculoskeletal pain in humans, they are also commonly found in other animal species, including dogs and cats and often contribute to (or cause) lameness and stiffness. The pain from trigger points varies from being mild and intermittent to being severe enough to cause non-weight bearing lameness.

How Do Trigger Points Developed?

Trigger points are thought to develop in skeletal muscle due to acute overload, overwork fatigue, direct trauma, chilling, as well as secondarily to other trigger points, internal organ disease and arthritis. The localised muscle contracture (spasm) present within a trigger point can persist for months or years after the trigger point has formed.

In dogs and cats, trigger points will often develop after musculoskeletal injury or surgery and in animals with arthritis. Once an animal has recovered from a painful condition or injury, there may be ongoing stiffness or lameness due to unresolved trigger points in the muscles. Trigger points will often occur in all four legs simultaneously (even though they may be causing most pain and lameness in one leg). Trigger point pain is often worse in cold weather and can improve with slight exercise but worsen with more strenuous activity. Stretching of the muscles helps to prevent the formation of trigger points.

How Can Trigger Points be Diagnosed?

Trigger points can be diagnosed by carefully observing the animal’s gait (shortening of a muscle will lead to a change in posture or movement), gently feeling the muscles for localised areas of firmness or tenderness (often leading to a yelp/jump from the dog, though some animals are very stoic) and testing the ranges of motion of joints. Joints will not move a normal amount in certain directions if the muscles around the joint have trigger points. X-rays and ultrasound are not of use to diagnose trigger points. There is often little or no improvement with pain-killing or muscle-relaxing medication.

Some common trigger points are shown in this illustration. 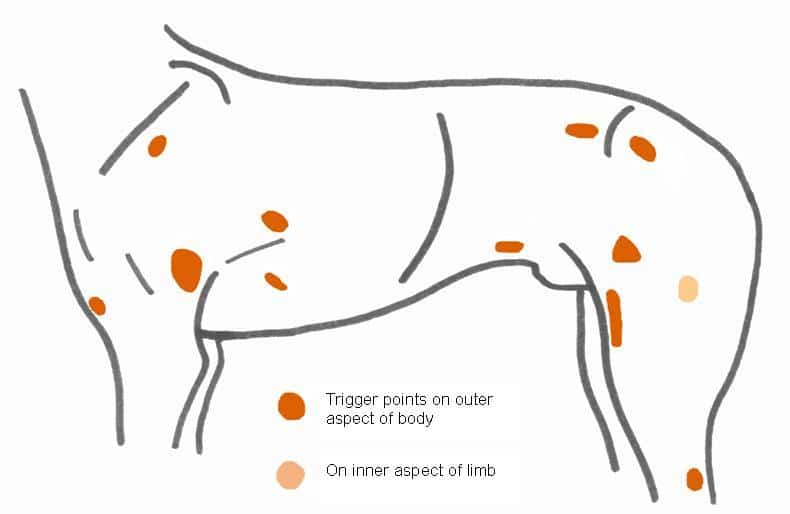 What Can be Done to Treat Trigger Points?

Many physical therapies are of use in treating trigger points. Treatment normally requires stimulation of the affected area, which causes some relaxation of the trigger point in the muscle, to allow the muscle to be gently stretched to its full length. At Gladesville Vet Hospital the stimulation techniques used include pressure/release massage, transcutaneous electrical nerve stimulation (TENS) and certain acupuncture methods. Gentle warming, massage and stretching techniques are usually shown to the owner to reduce the recurrence of trigger points. Treatment sessions normally last approximately 30 minutes. There is often a good to dramatic improvement in an animal’s lameness after up to four treatments. Maintenance treatments may or may not be necessary depending on the animal’s condition.