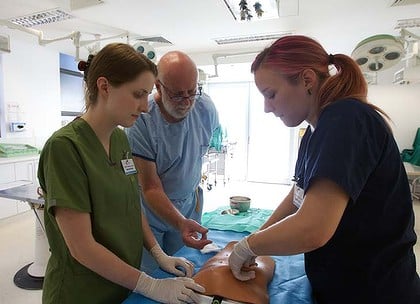 Three years ago, while working at Sydney University, Deepa Gopinath and Max Zuber became involved in a project aimed at developing a model of a dog’s abdomen that could be used to train veterinary students to desex dogs and cats.

They were working with a company called Studio Kite whose expertise was in manufacturing models for TV and films. The Bundy Bear is one of theirs.

In the last year these models have been rolled out in the surgery training practical classes at the university and Max has been involved in assessing the progress of the students in developing their surgery skills while using these synthetic dogs.

There has already been some international interest in the models, mainly from North America. Max is also in the process of organising a visit to the UK and Europe early next year where he is representing the Australasian Veterinary Surgeons Board in discussions on international training standards for vets and he is hoping to introduce the models into some of the European Veterinary schools.

As a result of his continued work with the models Max has just been informed that he has been selected to accept the University of Sydney’s 2013 Award for the Reduction in the Use of Animals in Research and Teaching.

The review panel overseeing this award agreed unanimously that his application stood out both for its novelty and potential for immediate impact on the reduction of animals used for teaching purposes.

The decision of the review panel was endorsed by the Animal Ethics Committee (AEC) at its meeting on 14 November 2013.

The AEC congratulated Max on receiving this award and thanked him for his endeavours to reduce the use of animals for scientific purposes.

Max will be presented with his award by Professor Jill Trewhella, Deputy Vice-Chancellor (Research), at the Senior Executive Group Research Committee meeting at the University in December 2013.