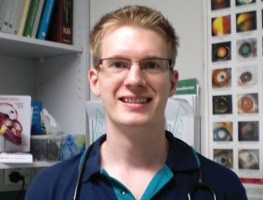 Many of you will have noticed a tall, good-looking, fresh-faced young man roaming the GVH corridors. Please join us in welcoming our new vet, Tim Hugo. Tim grew up in Balgownie; a small suburb on the escarpment of Wollongong surrounded by abundant native fauna, and graduated from Sydney University Veterinary School in 2007.

Before joining us at GVH in January he has been working in Wagga Wagga. His big move back to the city has been motivated by his interest in small animal internal medicine and surgery.

In his spare time (when we let him have any!!) Tim enjoys rock fishing, eating out and keeping fit at the gym. Tim and his fiancee’s current living arrangements mean that they are unable to have pets at present, but they spend lots of time with Tim’s parents German Shepherds (Jesse and Cassie), and his fiancee’s Belgian Shepherds (Sunny and Tindra).

Both Jesse and Sunny are very outspoken, ball-dominated males, whilst Cassie and Tindra are two, quiet, well behaved ladies, at least until they are left alone anyway.[Yes, I did say “fiancee”, so eyes off, girls- he’s taken !! ] Welcome aboard from all of us in the GVH team, Tim. You’ve only been here for a short time but already you’re making a big, and very positive, impact on the practice.
By CentralAccount|2017-02-08T05:36:11+11:00February 8th, 2017|Autumn 2010|