Lumps, Bumps and Warts – The Lumps We See 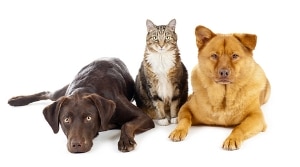 Skin growths are one of the conditions we see very commonly.   Because the skin is such a complex organ and contains so many different cell types, we can get a fascinating variety of primary skin tumours, cysts and so forth in the skin. There is also the potential for the skin to develop secondary tumours (tumours which have arisen elsewhere in the body and then spread to the skin). The skin is the body’s first line of defence.

We effectively live in a “soup” of bacteria, toxins and allergens. The only reason we, and our canine and feline friends, are still standing is ecause of the defences of our skin against all these things. The skin has cells which defend against bacterial invasion, defend against radiation exposure, act as a physical barrier to the world, produce secretions to lubricate the skin, allow blood to get to the skin and grow hairs to physically act as a barrier. There is potential for any of these to go wrong in some way.

The good news is that because they are readily visible, skin tumours are usually detected early. We can also learn a lot by just physically looking at the lump- does it arise from the skin itself or is it below the skin, has it changed the skin’s ability to grow hair, has it ulcerated the skin, is it an unusual colour? Many of the lumps we see are quite benign, but there are a few nasties that pop up on occasion.

Commonly when we see a skin mass, our next step is to get a sample to examine under the microscope, either via a needle aspirate or a direct impression smear. From this we can get a good idea of the cell types involved. Does it look like a tumour, cyst, or an infection? If a tumour, we may be able to tell what type it is and whether it needs to be removed as soon as possible with a wide margin (if it is a nasty tumour such as a mast cell tumour), whether it looks more benign (such as a histiocytoma which will usually go away spontaneously), or whether it is somewhere in between. Sometimes masses that look quite minor can be surprisingly serious.

The overall rule of thumb is, with the skin being so readily accessible and one of the areas most amenable to relatively non invasive surgery, we would always prefer to see skin lumps sooner rather than later. Because of the rich variety of masses which nature can produce, you can never be complacent with skin lumps.