Is My Cat Going Crazy

The thyroid gland is a small pink gland that lies in the neck to either side of the trachea.  It produces hormones called thyroxine (T4) and triiodothyronine (T3), which play an important role in energy metabolism in the body.  When the thyroid gland becomes overactive and produces too much of these hormones, the condition is called hyperthyroidism.

Hyperthyroidism is one of the most common diseases in older cats. It usually occurs in cats over 9 years of age. In most cases, the excess production of T3 and T4 is attributable to a benign but functional tumour in the gland.  The result is an excess of thyroid hormone levels in the circulation, which significantly speeds up the metabolism. The excess hormones affect the heart, causing a rapid heart rate and sometimes leading to cardiac insufficiency and failure.  High levels of thyroid hormones also increase the breakdown of fat and protein, causing your cat to lose weight and become very thin.
Common signs of hyperthyroidism include:

Most people notice a cat that has gradually become ‘crazy’: agitated and demanding food constantly despite being fed regularly, while losing weight at the same time.  Any of these signs in an elderly cat should trigger suspicion of hyperthyroidism.  It is important to have your cat examined if he or she if showing these signs, as hyperthyroidism can lead to severe muscle wastage as well as heart failure.  To start with, the vet may perform some blood tests to check the levels of thyroid hormones as well as to check the function of other organs such as the liver and kidneys.Once the disease is confirmed, there are two main treatment options that are commonly used.  The first is medication, and involves giving your cat tablets two to three times a day, as well as frequent blood testing to ensure the thyroid hormone levels are under control.

The drug is called carbimazole or methimazole, and it reduces the amount of thyroid hormone that the gland produces.  Initially, the dose may need to be altered until the blood tests and cat’s clinical state confirm that the disease is adequately controlled. The other option is nuclear medicine.  This procedure requires special equipment and is only carried out in certain hospitals, such as Gladesville Veterinary Hospital.  At GVH, we first administer a low dose of a radioactive compound called pertechnetate which highlights overactive thyroid tissue.  We can see this abnormal tissue when we take images of the cat using a special camera called a gamma camera.  Once we have these images, we can calculate a dosage of another radioactive compound called radioactive iodine (I131), which is used to destroy only the abnormal areas of the gland.

After we administer I131, we must hospitalise the cat for several days until his or her radioactivity levels are low enough for him/her to be sent home.  Following discharge from hospital, we ask that as a precaution, you refrain from prolonged close contact with your four-legged friend for at least a week. We request a check up of the cat a week following discharge, and a repeat blood test in six weeks to ensure that the thyroid levels have decreased to normal.  The nuclear medicine option is very effective, and around 95% of cats will be cured after one treatment. It is the treatment of choice for most cats that have hyperthyroidism although it is especially preferred in those cats that make the administration of tablets very difficult.

Once the cat has been treated and after the six-week check, the majority of cats do not require any further check-ups or tests for hyperthyroidism. It is however more expensive in the short term and involves your cat staying in hospital for a few days while the radioactivity decreases to a safe level.  The cats in the nuclear medicine ward are checked daily and medications can be given if necessary, however checks are minimal in order to protect veterinary staff from unnecessary exposure to radioactivity.  Side-effects with both methods described here are minimal and both options are fairly effective, however nuclear medicine is often considered more convenient and less stressful to the cat in the long term.
Hyperthyroidism should definitely be treated as quickly as possible, but the method chosen will depend on finances, the cat’s health status and availability of treatment. 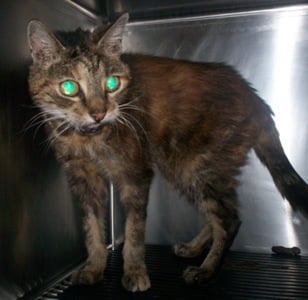 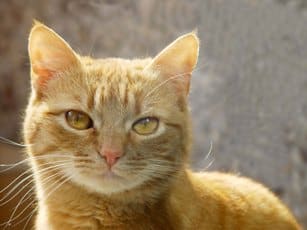