Engineers Find Cats Lap With Just Tip of the Tongue

The following article, written by Nicholas Wade, appeared in the Science section of The New York Times,  published November 11, 2010.We thought it might be of interest to our readers…!!!

For Cats, a Big Gulp With a Touch of Class 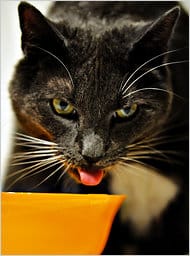 Dog owners are familiar with the unseemly lapping noises that ensue when their thirsty pet meets a bowl of water. The dog is thrusting its tongue into the water, forming a crude cup with it and hauling the liquid back into the muzzle. Cats, both big and little, are so much classier, according to new research from the Massachusetts Institute of Technology and Princeton University.

A recent report in the journal “Science” reports that the cat’s, the four engineers report that the cat’s lapping method depends on its instinctive ability to calculate the balance between opposing gravitational and inertial forces.

What happens is that the cat darts its tongue, curving the upper side downward so that the tip lightly touches the surface of the water. The tongue is then pulled upward at high speed, drawing a column of water behind it. Just at the moment that gravity finally overcomes the rush of the water and starts to pull the column down — snap! The cat’s jaws have closed over the jet of water and swallowed it.

The cat laps four times a second — too fast for the human eye to see anything but a blur — and its tongue moves at a speed of one meter per second. Being engineers, the cat-lapping team next tested its findings with a machine that mimicked a cat’s tongue, using a glass disk at the end of a piston to serve as the tip. After calculating things like the ‘Froude number and the aspect ratio’, they were able to figure out how fast a cat should lap to get the greatest amount of water into its mouth. The cats, it turns out, were way ahead of them — they lap at just that speed. To the scientific mind, the next obvious question is whether bigger cats should lap at different speeds.

The engineers worked out a formula: the lapping frequency should be the weight of the cat species, raised to the power of minus one-sixth and multiplied by 4.6. They then made friends with a curator at Zoo New England, the non-profit group that operates the Franklin Park Zoo in Boston and the Stone Zoo in Stoneham, Massachusetts, who let them videotape his big cats. Lions, leopards, jaguars and ocelots turned out to lap at the speeds predicted by the engineers.

The animal that inspired this exercise of the engineer’s art is a black cat named Cutta Cutta, who belongs to Dr. Stocker and his family. Cutta Cutta’s name comes from the word for “many stars” in Jawoyn, a language of the Australian aborigines. Dr. Stocker’s day job at M.I.T. is applying physics to biological problems, like how plankton move in the ocean. “Three and a half years ago, I was watching Cutta Cutta lap over breakfast,” Dr. Stocker said. Naturally, he wondered what hydrodynamic problems the cat might be solving. He consulted Dr. Reis, an expert in fluid mechanics, and the study was under way.

At first, Dr. Stocker and his colleagues assumed that the raspy hairs on a cat’s tongue, so useful for grooming, must also be involved in drawing water into its mouth. But the tip of the tongue, which is smooth, turned out to be all that was needed. The project required no financing. The robot that mimicked the cat’s tongue was built for an experiment on the International Space Station, and the engineers simply borrowed it from a neighbouring lab.