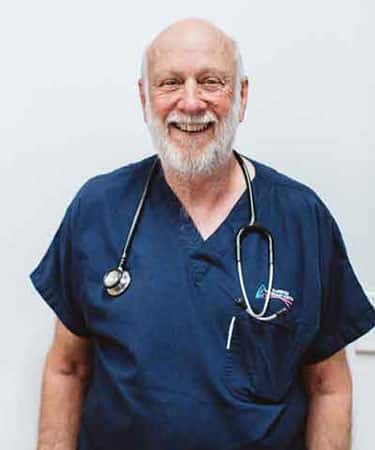 Max is a qualified specialist in small animal surgery with a particular interest in orthopaedics and oncology. He graduated from Sydney University in 1969 and has been at Gladesville since 1971. Max has been away from the practice from time to time taking a variety of roles in the Veterinary Faculty at the University of Sydney where he has acted as the Head of Surgery and, more recently, the CEO of the Veterinary Teaching Hospitals. Currently he retains a role teaching surgery and is the Academic director of the Clinical Skills Centre set up to teach clinical skills to vet students without the need to use animals for this purpose. In 1994-95 he was also appointed as a Visiting Fellow at the University of Florida.

Max qualified as a specialist in small animal surgery, becoming a Fellow of the Australian and New Zealand College of Veterinary Scientists in 1985. In November 1991 Max opened the first diagnostic nuclear medicine facility for small animals in the Southern Hemisphere at Gladesville. He receives referral cases for this facility from throughout the country.

In 1993 he was recipient of the Seddon award for meritorious clinical contribution to Veterinary Science in NSW and has twice been awarded the Australian Small Animal Veterinary Association’s “Practitioner of the Year”.

Max is a born and bred Sydneysider, father of four and grandfather of 8 who has, with his family and many pets, lived within a 5 km radius of the Gladesville Veterinary Hospital Since 1961.

In 2021, Max was also awarded a Member of the Order of Australia for his dedication to veterinary science.