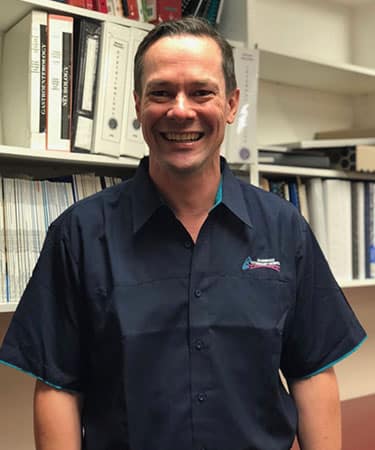 Dr Mark graduated with first class honours in Veterinary Science from Sydney University in 1994 and has been an associate at Gladesville Veterinary Hospital (GVH) since 1998. Mark grew up in Sydney and worked at a practice in Canberra for over three years after graduation. Mark completed a certificate in Veterinary Acupuncture (the International Veterinary Acupuncture Society certificate) in 2001. In 2002, he participated in a course in Trigger Point therapy run by Dr Liz Frank, a West Australian vet who has done pioneering research in this area. Mark undertook a year long distance education course in Veterinary Internal Medicine in 2004.

Mark’s interest extends to most other areas of small animal practice, including bird medicine.