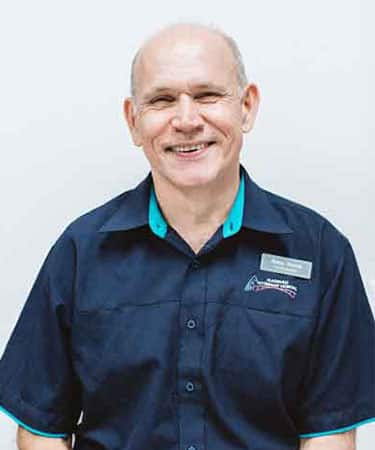 Barry first came to Gladesville as an associate vet in 1986. Barry grew up amongst the mulga trees of a sheep and cattle property in far western Queensland. A childhood with an endless menagerie (joeys, a rabbit called Monica, a sheep, tortoises and, notable among these, two particular dogs and progressive generations of pet bantam chooks) led inexorably to the University of Queensland where he graduated in 1978 with a BVSc 2nd class honours.

Then followed a veterinary travelogue. Firstly a four year sojourn to Victoria in dairy cattle practice followed by two years wandering the world – this was funded by intermittent veterinary engagements in the UK; then a year’s mixed practice in Murwillumbah before electing to concentrate on small animal practice here in the most beautiful city on the planet.

Barry first came to Gladesville as an associate vet in 1986 and became one of three partners in 1990. Whilst a generalist by nature, an interest in ophthalmology saw him complete a year long post-graduate Distance Education course in this field in 1996. This interest continues and he is happy to encourage the “eye” cases of our practice into his domain. A similar course in radiology was completed in 2000 and most then another year long course in feline medicine in 2007.

And otherwise? Barry likes to draw and cartoon, to drink red wine (well, alcohol really), to dig fairly haphazardly in his garden and to travel (anywhere!). He shares a home in the inner-west of Sydney with his partner Peter and two sweet dogs, two cats and numerous chooks whose egg production could also be described as haphazard. Yes, the bantams made a triumphant return after all those years … and not before time! They bring a busy jollity to our backyard and are enthusiastic little pets.