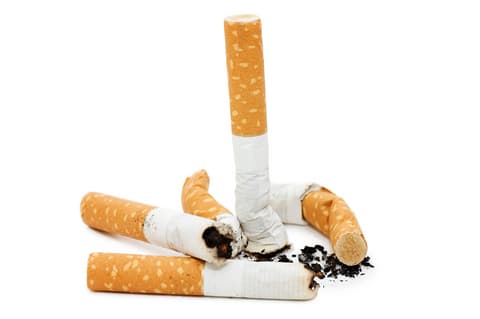 Passive smoking can be harmful to dogs!

All mammals (dogs, cats, humans etc) have similar respiratory systems – basically a series of connected tubes which get smaller and smaller. There are nostrils, nasal cavity and trachea which make the UPPER respiratory tract, and the lungs which make the lower respiratory tract. In the lungs are bronchii which are a network of dividing, branching tubes which get smaller and smaller (like the branches of a tree). The air travels along the bronchii until it reaches the alveolus, which is a dead-end sac. It is here that the gas exchange takes place. Oxygen moves into the blood stream and the waste product (carbon dioxide) move into the alveolus. It is then expired out by travelling back up the way the oxygen came in.

The lining of the bronchii and alveoli is very sensitive, and cigarette smoke is extremely irritant, causing spasm of the tubules, which can lead to coughing. Dogs will suffer the same passive smoking effects as humans, especially if the smoking occurs indoors in a confined space. Clinically this can lead to coughing, and increase the risk of bronchitits (inflammation and infection). Asthma-type syndromes also occur in both dogs and cats, with wheezing and shortness of breath. Cigarette smoke in the airways reduces the amount of oxygen which gets into the blood. These problems are relatively common in animals whose owners smoke inside, and cause discomfort for pets.

Cigarette smoke is also a carcinogen in animals just as it is in people, so passive smoking can also potentially cause cancer in pets.