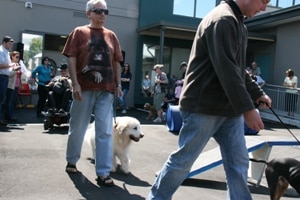 Many of you who attended our Open Day will have seen Indianna the Golden Retriever (pictured here) doing the rounds of the dog show.

Indianna won a prize in the “Grande Parade” category, a new award to a trophy cabinet which already included “Best in Show” award at last year’s Moocooboola Festival.

We have the sad duty of informing Indy’s many fans and friends that very soon after our Open Day she developed an extremely aggressive cancer and had to be put to sleep.

Indy had reached the grand age of thirteen, and was something of a regular at the hospital, often spending the day boarding with us if there was a thunderstorm predicted, and always accompanied by one of her many fluffy toys- all of which she knew by name.